This was a water powered mill built in the 18c and used for grinding corn, until the early 19c when it became a forge. The first we know of this area was an advert in the Newcastle Journal 1767 when it is described as ’ a new built barley mill with large granaries and all necessary conveniences.’ An archaeological survey in 1982 said the horse shoe dam could not conclusively be dated earlier than 1800 although there is evidence that it was built over an earlier straight dam structure. The earliest horse shoe dam recorded was built by John Smeaton in 1776 across the River Coquet. The Massey’s Forge dam has two wheel pits and a large extension used as wagon porches which were built before 1838. Black lead crucibles were found during this dig these may have been for making crucible steel, converting blister steel into a more homogenous form to be cast and forged. Remains of the mill building and at least one wheel pit survive. The site was backfilled after the excavation to ensure its survival.

G&J Emmerson and Thomas Milner were Ironmongers from The Side in Newcastle – Emmerson had a lease on the building to use as a forge in 1808 and Emmerson & Milner held the lease jointly in 1828 as iron founders, steel and firebrick manufacturers – 1837 is the first mention of ‘Milner’s Pit’. The pit mined ‘hodge’ or cannel coal which splinters and burns like a candle – it burns very hot and clear and was suitable for smiths’ work – so would be in high demand – Winlaton was a village of blacksmiths. The pit was part of the Blaydon Main seam and linked underground with the ‘Hazard’ & ‘Speculation’ pits – on the site of the former Blaydon swimming pool – as well as a ‘Mary’ pit on Blaydon Bank. The Blaydon main seam is recorded in 1628 and in 1643 but had closed by 1706, then re-opened in 1853, closing finally in 1921. Milners pit closed in 1921 after flooding. Emmerson & Milner’s bricks had their own mark ‘E&M’ and even after the tenant William Cochrane Carr moved his works to Benwell in 1850 they continued to use the ‘E&M’ mark because it was well known as a reliable product.
In 1850 Smith, Patterson & Co. Pioneer Foundry & Engineering Works began here but moved to Blaydon in 1873 when the site left no room to expand. They made chairs for railways, cast iron segments for tunnels etc. and if you study manhole and drain covers there are many examples of their work ie: Beamish Museum has a 1913 Smith Patterson manhole cover near ‘The Sun Inn’ – so that’s a new hobby for you – looking at drain and manhole covers. 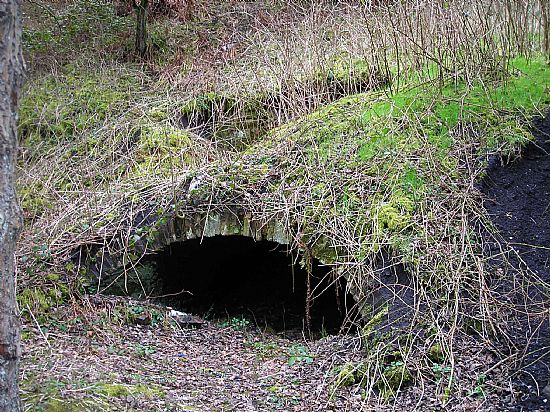 On the far bank we can also see the remains of what are possibly two vaulted fire brick ovens with vent holes in the crown of the vault built using ‘E&M’ bricks. The interiors are choked with debris and the front walls are missing. They are most likely the two Newcastle kilns at the Milner yard which were used for burning gas retorts in 1863, by which date was part of Cowen’s Low Yard , however archaeologists also thought they could be dated c1800. There was a possibly that they could be coke ovens of the ‘long oven’ type – in which case they would be of national importance – they haven’t so far been fully excavated so this is uncertain. When William Bourn walked down this valley in 1896 he reported that the foundry was abandoned & in ruins. An excavation in 2007 found stone bottles, bricks, clay pipes, pottery and bits of iron.

The burn itself is underground through most of the site, emerging for only short stretches. Despite the industrial past the water itself is fairly clean supporting sticklebacks and a variety of invertebrates including freshwater shrimps (Indicate clean H2O. Prefer flowing water as require O2-use legs to constantly push water over gills. Filter feeders. Lay eggs into pouch – hatch - release live young) and some species of mayfly, which, in turn support birds such as dipper (unique songbird as can wade, swim & dive in running water) and grey wagtail (Amber listed – badly affected by harsh winters and have recently declined. Move into city centres in winter).