....also known as Haggerstone’s Mill is thought to have existed since at least 1769 and in 1783 was advertised as a ‘well known and populous water corn mill belonging to the Lords of Winlaton’. By 1825 it was described as out of repair, but the dam was in fair condition. Occupied again by 1851 the miller was Charles Robson, his sons were a miner and a brick maker. In 1856 it was known as Haggerstone’s mill but by 1861 the tenants were Barbara Fenwick and Robert and Jane Wintrip. Robert was possibly working at the High Mill. Ann Bagnall & Sons (related to R.S.Bagnall of Winlaton ) were running a file cutting works here in 1871 and 1881, but had left by 1891. Hand cut files were made for smoothing iron made items. The files were made at a small stone stiddy facing a long low window with the filemaker holding a steel block on which a piece of lead supported the blank file and all was held in place with a leather loop into which the worker's boot pressed. In 1896 the mill was in ruins and the site disused and derelict and by 1914 this mill had disappeared under railway sidings.The land became contaminated and after reclamation new landscaping was designed to prevent contaminated waste polluting the water and the burn was brought back to the surface again in this area. 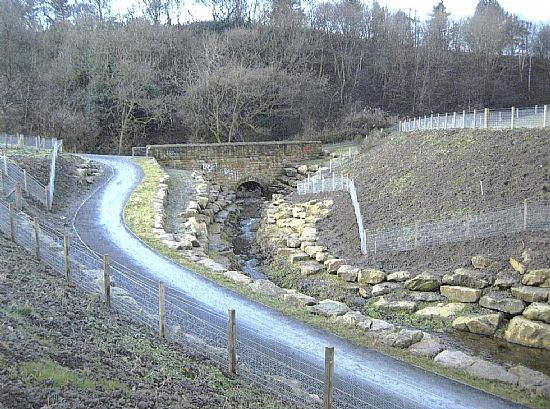