A Brief History of Winlaton Vulcans 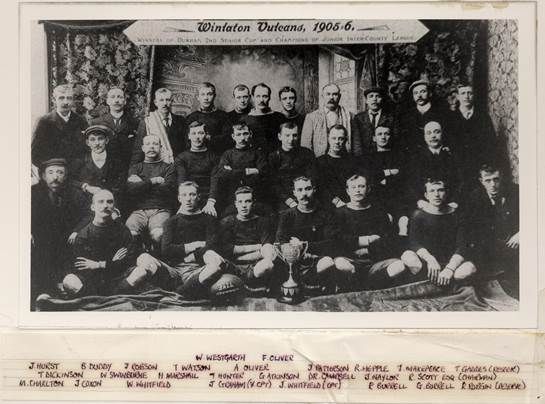 The club was first formed in 1896, but disbanded on no less than 4 occasions because of world wars, and mainly due tour predecessors, not having their own playing pitches or stripping facilities. The club was disbanded in 1951.

It was reformed in 1964, and in 1964 was granted a 25 year lease by Blaydon UDC ( now rent reviewed every 4 years) for 3 pitches and the building of a clubhouse on the Axwell View playing fields at Winlaton.

The funding of the clubhouse estimated at £10,000 was by way of a £6,000 loan from Nimmo's Brewery over a period of 15 years, for which 5 business men in the village agreed to be guarantors for £500 each, and a grant of £4,531 from the then Department of Education and Science.

On completion, the club from day one was operated as a business with a full tome steward and Stewardess with part time bar staff, and was to become the central focal point for all social activities in the village, in healthy and lucrative competition with the existing 7 pubs and 3 CIU clubs. Organisations involved within the club included the Village Gardening, Holiday, Cycling, Junior football, Ladies Aerobics, Ladies darts, Sequence Dancing, and Derby and Joan clubs, as the St John's Ambulance Brigade and Boy Scouts.

In 1971 to celebrate the 75th Anniversary of the formation of the club, the clubhouse was extended by almost a third in size to include a dining area and kitchen, new ladies and gents toilets, further stripping accommodation, a fitness room and storage room at an overall cost of £17,000.

In 1992 match standard floodlights were erected and tubular steel fencing placed around the first team pitch at a cost of £23,000, and a new boiler and heating system installed at a cost of £13,500.

In 2002, the club was Incorporated as a company on the advice of the Rugby Football Union, in order to safeguard the security of the club, and to help assist when applying for Financial/Grant Aid.

We hope the club will continue for many years to come.