The Secret Tunnel of Winlaton

In 1936 a steam roller, being used in the process of carrying out road repairs in the Low Town End area, fell through the road into a cavity which on further inspection turned out to be a man made tunnel. This find was reported in the (long defunct) ‘Evening World’ newspaper under the headlines “Secret Passage at Winlaton, Monks Ancient hiding place.” Underground find by Workmen.” The newspaper story said that the tunnel, which had been hewn out of solid rock, was over 5 feet deep by 2 feet wide and was overlaid with 8” thick stone slabs. 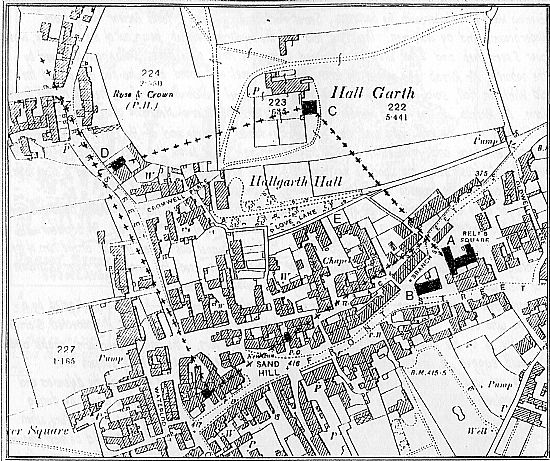 Mr Kirsop, as well as being the owner of the old Winlaton Hall, was owner of the land where the tunnel was discovered, and told the reporter that he knew of the existence of the tunnel, which had run from the Winlaton Hall to the Hall Garth farm. Being a member of the Society of Antiquaries of Newcastle, he would have been a man of position and knowledge, therefore his recounting of the exploration of the passage by a Winlaton man, who Mr Kirsop said he knew personally, must be accorded due veracity. According to Mr Kirsop, this local man had entered the passage through the Winlaton Hall entrance and followed the tunnel until it broke off at right angles below Back Street. He followed this course and came to larger excavated area, thought to be just below the Sandhill, where he discovered a large stone table. He continued following the passage until he reached as far as the ‘Low Town End’ but then became nervous of going further.

It is not known if anyone has investigated how far north the passage continues after this point or where its exit is but according to reports the entrances in the grounds of the hall and the chapel were sealed off. Apparently this was not the only occasion when the passage was exposed. At the beginning of the 20th century it was reported that a brewery, which stood behind the Co-op buildings, was using the tunnel as a sewer to dispose of waste, when it was reported that a donkey had fallen into it.

The above information has been taken from T.R. Hodgson’s account which is contained in his book entitled “Meldred,  First Lord of Winlaton Manor”  It is his belief that such a huge undertaking as the excavation of the passage could only have been instigated by the person who owned the whole area i.e. the Lord of the Manor. Therefore it could actually date from the 13th century (which is when the Hall was built) and
may have connected the important buildings of the Manor of Winlaton i.e. the Hall, the Manor Farm, the chapel and another unknown building which may have existed to the west of the Sandhill. (Mr Hodgson suggest that this may have been a watch tower) .Where and how far the tunnel leads to after the Low Town End can only be conjecture.The purpose of the tunnel could have been to provide a means of supply or escape for the defenders of the Manor at a time when the likelihood of attack from marauding Scots, rival barons or large robber bands was prevalent.

According to Mr Hodgson the tunnel must have been broken into sometime after 1928 as the previously mentioned stone table, stood in Tebb’s garden until the house was demolished in the 1960/70’s.

Realistically the tunnel may be no more than old mine workings, although there is certainly the possibility that the area containing the table may have been used in the 16th century for religious services during the period when catholic services were banned.