The coming of the railway changed life and industry forever.It heralded the end of the stage coach and was the beginning of the end for the keelmen. William Bourn writing in 1896 said he regretted the demise of the jolly coachman.The line through to Hexham was built in sections with each section being formally opened with banners, triumphal arches, the firing of cannon, bands of music and cheering spectators along the route. The great day for passenger traffic on the Blaydon-Hexham section was 09 March 1835.

BUT ALAS THE DAY DID NOT GO WITHOUT INCIDENT

For the ceremonial procession there were two trains the ‘Rapid’ and the ‘Comet’ and 600 tickets issued. The excursion was meant to start at 10.30 am but the trains had to wait for the Mayor of Newcastle to arrive, the Mayor and his party were travelling down river by the Mayoral barge from Newcastle. They were over ½ hour late and the trains finally got underway at 11.00am accompanied by bands of music and attended by guards in handsome liveries.But while they had been waiting the engines had blown off a great deal of steam and had to stop to replenish their water tanks. Then after they got going again there was a further delay caused by some of the wagons slipping off the line. The party eventually reached the Triumphal Arch at Hexham at half past one – over 2 hours late. They set off on the return journey at 3.20 pm by which time it had started to rain and everyone in The open carriages got thoroughly wet!

The little stone built station first opened at Blaydon in 1835 had by 1881 deteriorated so much that the local health board complained to the railway authorities about its condition.So, the station was rebuilt in 1911 in red brick with ornamental cast iron columns supporting glazed platform canopies, a covered footbridge was added at the same time. In 1966 it was decided to close Blaydon Station but it was reprieved in 1969 and became an unstaffed station using pay trains. 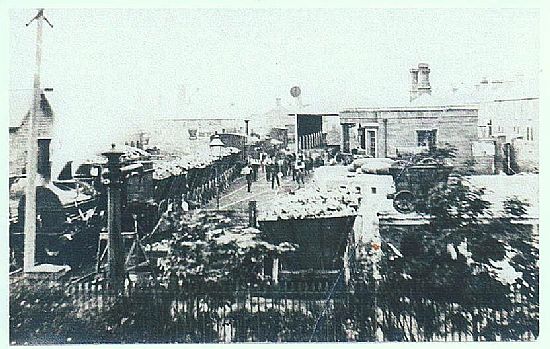 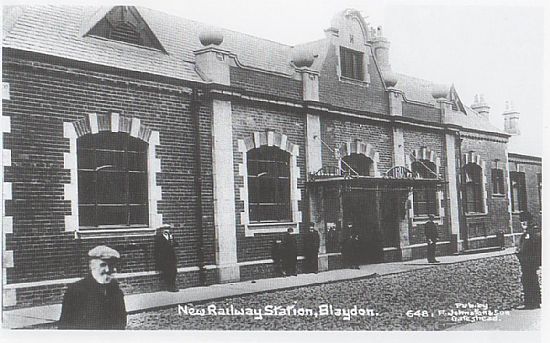 A JOURNEY TO HELL!

The first railway excursion from Blaydon Station was Sunday,14 June 1840 to Carlisle with 320 passengers. This violation was denounced fromthe pulpits, a Newcastle Minister issued placards and hand bills denouncing the trip as follows:  “A reward for Sabbath-breaking.   people taken swiftly to Hell”  (next Lord’s day for 7s/6d)

The day after the excursion another handbill appeared announcing the safe return from the destination mentioned.This was the first rail excursion ever run on any railway in the world when reduced fares were given on certain routes. In January 1840 Joseph Cowen entered into an agreement and was later given wayleave by Peregrine Edward Toweneley to build a waggonway.This formed the first continuous rail link between Blaydon Burn hamlet and the Tyne, much needed to transport fireclay products from the High Yard to the quay on the River Tyne. But a clause in the agreement specified that the waggonway was “not to injure the supply of water to the waterwheels on Blaydon Burn”. In time the single track was extended with extra tracks for carrying goods around the growing industrial complex, the whole site became linked by rail and gradually the stream itself had mostly disappeared into a culvert. There are no details of the locomotives used before 1896 but after that there were 12, 0-4-0 engines all 4’ 8½ “ gauge and individually named Enterprise, Energy, Venture, Active, Industry, Betty, George, Nell, Gerald, Claude and Blaydon Burn No.1 and No. 2. The retaining walls all show use over a long period of time. They are constructed of stone and brick with repairs in stone, brick and concrete. There are various access steps and stairs, refuges, arched openings and platforms. There were various slag and spoil heaps while the pits were in operation. 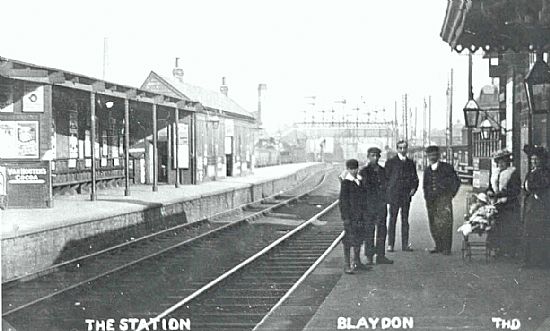 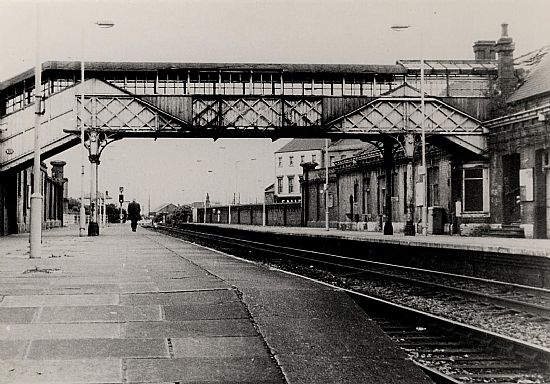 From : A History of Blaydon by Winlaton & District  Local History Society 1975