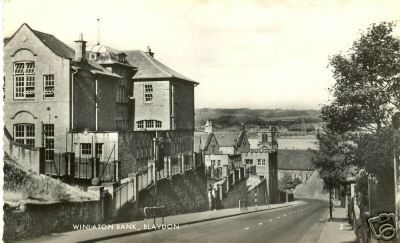 The road we now know as Blaydon Bank was for many years known as Silver Hill. The Blaydon Lead Refinery, owned by the Blackett family and situated between the river and the railway signal box, was an important part of the process of extracting silver from lead during the eighteenth century.

The Blacketts also owned lead smelting mills at Dukesfield near Slaley, Allenhead & Rookhope, passing to their successors the Beaumonts with the refinery at Blaydon. Sir William Blackett purchased his estate in the Lordship of Winlaton in 1670/1 and from at least that date brought lead along the lead road on pack horses, 15 or more small and sturdy galloways at a time with 2 men in charge. A wood frame was fixed over the backs of the ponies with a piece of lead on each side. Two wheeled carts were later used to carry the lead. There was an important handover point for the lead at Apperley Bank Foot west of Hedley. The carriagemen, mostly farmers, worked part time during the summer months when the tracks were passable. Other carriers were Blackett tenants from Winlaton, bound by their leases to go to Apperley to collect lead. By 1790 93 carriages were constantly used to bring down the lead carrying 10 pieces each, over 100,000 pieces of lead each year. In 1821 the Blaydon refinery had 4 refining furnaces, 2 reducing furnaces & 1 slag hearth. The London Lead Co. also owned Smelt Mills across the fells at Whitfield, Acton and Hunstanworth, and brought their lead down to staithes at Stella. Lead was carried on down the Tyne to Newcastle where it was used in factories or shipped out to elsewhere in Britain and overseas.

There was a windmill within the works used to raise water from the river to supplement the water supply to the mill from Shibdon Dene. Hugh Lee Pattinson (1796-1858), from Alston worked at Blaydon as Chief Smelting Agent c1832 and he developed & patented a better method of extracting silver from lead in 1833 making the process viable even if the proportion was only 3oz silver per ton of lead. This process, developed in Blaydon, spread throughout the world.


Blaydon House, now sadly derelict was the home of Robert Mulcaster, the agent for the Blacketts and Beaumonts, and well placed to oversee the work along the river. The finished goods were shipped out to Newcastle from Blaydon Quay. By the 19th century the works were in decline and other industries took their place; now all that remains is a short stretch of wall along the riverfront.

The Heritage Lottery-funded Dukesfield Smelters and Carriers Project plans to commemorate this industry during 2015 with a riverside information panel, and will at the same time make available an online database of thousands of letters documenting the industry, which will include much information on the Blaydon area: www.dukesfield.org.uk