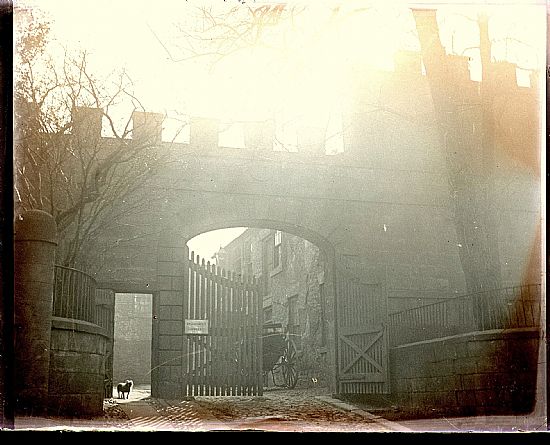 Blaydon House situated in Garden Street, Blaydon ne21 4ag,  opposite Blaydon Roundabout and next to Hadrian House was a fine Georgian house and the last remaining building of consequence in old Blaydon.

In a plan of Blaydon dating from 1775 the village was composed of a number of houses bordering the Hexham turnpike on the east side of Blaydon Burn. The present road from Winlaton to Blaydon was Sir Edward Blackett’s  ‘Lead Way’ by which lead was carried from the mines at Allenheads to the smelt mill at Blaydon which was on the site of the railway station. Between the smelt mill and the west end of Tyne Street was the village green, extending southward to the turnpike. Alongside the green at the river side was Lord Strathmore’s Quay.

The upper valleys of the Tees, Wear, Derwent, Allen & South Tyne were known as the lead dales. The Romans used lead and in the middle ages the demand for lead was so great that lead mining became the main industry alongside farming. The lead being used for roofing and piping. From the 15c onwards there was a general shortage of bullion and the lead was also needed for its silver content.

An act in 1693 opened up the industry to private enterprise and two companies dominated the industry for the next 200 years – The London Lead Company ( also known as the Quaker Co.) and The Blackett-Beaumont Co. Before the developments of carriages and wains the lead was carried from the mines by small Scotch galloways. A wood frame was fixed over  he backs of the galloways containing a piece of lead on each side. The leading pony had a bell attached to his head in order to guide those behind. There would be 40 or 50 galloways walking across the fells under the direction of two men all the way from Allenheads to Blaydon.

The wharfs at Stella and Blaydon received most of the lead which came down the Tyne. The smelt mills were on the Derwent River at Whitfield, Dukesfield, Allenheads, Rookhope and Feldon near Edmundbyers with the refinery at Blaydon. The yearly receipt of lead in the 19c was 60,000 pieces of twelve stone each. There were 93 carriages constantly employed to bring down the lead, each carrying ten pieces at a time. The average number of pieces of lead sent to Blaydon from the western mines was about 100,000.

The lead belonging to the heirs of Sir Thomas Blackett was refined at Blaydon and then shipped out. Every ton of lead-ore produced nine or ten ounces of silver and because of this the road from Winlaton to Blaydon was known as ‘Silver Hill’. The lead mines later became the property of Col. & Mrs Beaumont who also then owned the refinery at Blaydon. The coming of the railways in 1835 lead to the demise of the staithes and smelt mills.

For much of the 18c Dukesfield was the main Blackett smelt mill and the place from where the whole process of moving ore and smelted lead from Weardale and Allendale down to the staithes and Blackett/Beaumont refinery at Blaydon was managed. The Dukesfield Lead Smelt Mill is currently part of a Community Heritage and Conservation Project with a ‘first stage pass’ from the Heritage Lottery Fund North. Part of the process is to raise awareness of the importance of the lead industry and the refinery at Blaydon and their part in the development of industry and commerce on Tyneside.

Blaydon House which is early 19c, about 1819, is an important relic of the past industry of Blaydon having  been built for John Mulcaster who was agent to Thomas Richard Beaumont. He had previously lived in a house in what became Wesley Square, Blaydon. In the later 19c the house was the residence of Dr. Brown.  The stone built house is a large structure with an excellent Georgian door case in a commanding position and with attached stables. The former garden is now occupied by a residential home ‘ Hadrian House’. Blaydon House had been used as a social club for many years but has stood empty for sometime.

The building is not listed but does appear on the Gateshead local list. Both Gateshead Council and the Tyne & Wear Building Preservation Trust are aware of the building and efforts have been made to contact the owners with a view to making the building watertight.