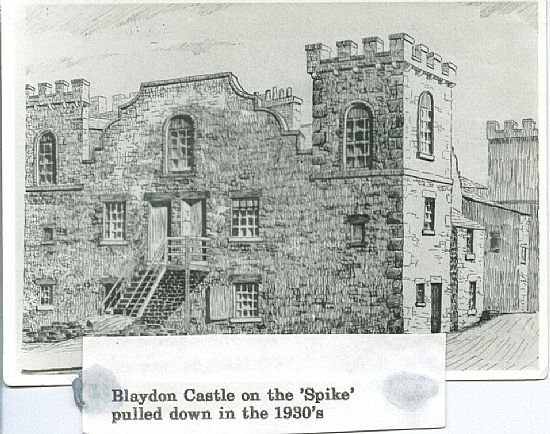 The “Castle”, or more accurately in more recent times “Turret Place”, stood on the ‘Spike’ until 1926, when it was demolished as part of the Council’s pre-war clearance. A 17th century map describes the area as ‘Sir William Selby’s Haugh’ and is therefore presumed from this, and its architectural style, that the castle was built for him in the early part of that century. As a result of the Civil War and family tragedies, Sir George Selby was forced to sell off his estates in parcels which were acquired by the Clavering and Blackett families in 1675.

However, members of the Selby family continued living in Blaydon, for in 1721 Mrs Francis Selby was buried at Ryton Church and it is probable that they still resided in the castle. Later on it was deserted by them due to costs and in 1800 was made into tenements which housed twelve families. Each tenement consisted of two large stone floored rooms and two small rooms, all with rough whitewashed walls and outside “netties” which were shared by all families.

The area became heavily industrialised and by 1860 a lot of the inhabitants were Irish workers and it is thought by some that the derivation of the word ‘Spike’ could have originated from the Irish for ‘lodgings’.  Being divorced from Blaydon by the railway line, the Spike became a village on its own, with its own identity. Having six streets with two pubs, the Pioneer and the Bottle House, and two chapels, the community was “one big family” and as such very close knit.    Photograph of Blaydon castle courtesy of Mary Green (nee Sloan) who lived in No 24 Turret Place (Mary is the girl on the right of the picture) and now lives in Stella. 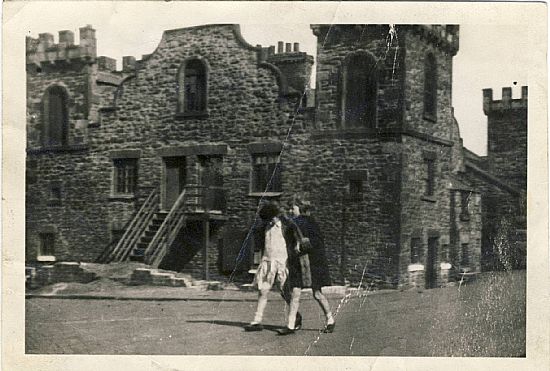 History as told to her by a Mr Hughes who was born there in 1917.