A group of six cist burials were found in the 1930s on and around Summerhill,Blaydon, which is a steep promontory hill with panoramic views over the valleyof the River Tyne. This, and the soil, which is glacial sand with sandstone slabs,would have made Summerhill an attractive burial spot. The six cists are a closegroup of five and an outlier. The sites of numbers 2, 3 and 4 have probablybeen disrupted or destroyed by the modern A695 road. The whereabouts of only a few of the cist stones, grave goods and human remains are known. 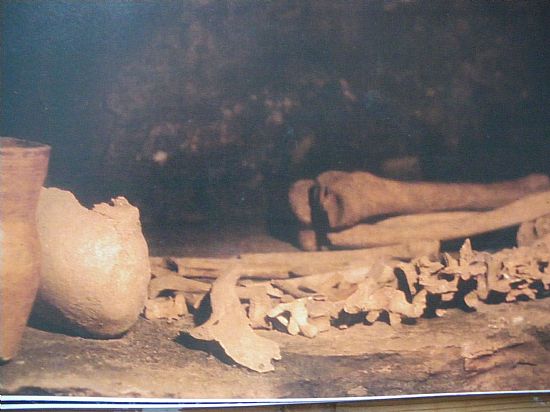 Cist 1 -  The first was found by some boys in May 1930, at the top of the Summerhill. It contained the remains of a man and a woman, with a beaker and a knife. The boys were playing sliding down the hill when the soil fell away. George Woods, Daniel & James (Jim) McCaughern and George Biggins said that they were so excited as they thought that they’d found buried treasure and were disappointed to find ‘only’ bones and pots. They told Mr. John Huntley, headmaster of Blaydon Intermediate School about their find when they went to school the next day and he informed the Hancock Museum. The Police afterwards took possession of the bones, even the bones of an ancient Briton are not exempt from the exacting requirements of modern law and the police duly reported the discovery to the coroner in the ordinary way. The bones were examined by Mr. Parker Brewis who was for 21 years curator of the Black Gate Museum. He pronounced them to belong to the Bronze Age. Two skeletons were found in a cist or coffin built of rough stone slabs about two feet below the surface of the ground on the extreme top of the hill. The cist is about two feet broad, three feet six inches wide and about two feet high.. The urn is of burnt earth ornamented with bands and crossed giving evidence of design and craftmanship.Mr. Huntley told the ‘Evening Chronicle’ representative that in Neolithic times the method of burial was in a barrow or artificial mound of earth. The body with its chin between the knees facing the rising sun was laid on a stone slab and surrounded on all four sides and the top by further slabs making a stone cist. An urn containing food was usually buried with the body to provided sustenance for the dead man’s journey to the next world, a proof that Neolithic men had a belief in a future state. Earth was then heaped over the coffin, the stone serving to prevent wild animals from digging out the body. Five other cists were found after that.The cist is displayed inside at The Great North Museum (Hancock), although now without the story of the boys
find.
Margaret Watson      Jan 2018
Evening Chronicle   12 & 13 May 1930 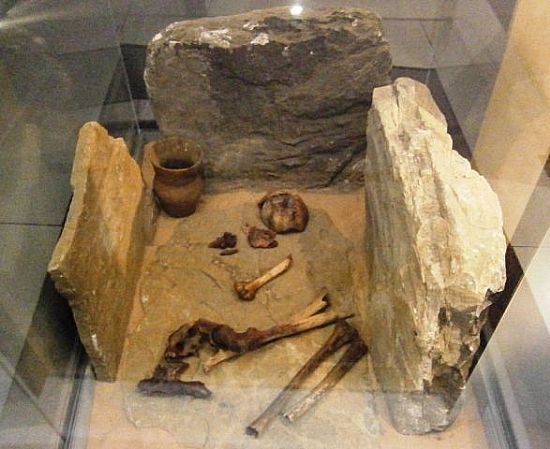 Cist 2 - On 5th of August 1937, the second cist was found at NZ17506339, in a sand pit a few metres south of the hill top. It was excavated by G W Temperley of the Hancock Museum, with Miss G M Scott of the Hancock, and Mr W Bulmer of Corbridge Museum. They dated it at 1500 BC. It was found 50 cms below ground, and constructed of four 75mm thick sandstone slabs to form a cavity 90 cms x 65 cms x 53 cms deep. The cover stone (or stones) was badly broken. It contained a single skeleton in a contracted position with the head at the northern end. Behind the skull of a skeleton, there was a flint knife of dark blue-grey flint some 50 mm long by 25 mm wide.The knife may now be in the Sunderland Museum.

Cist 3 - On 11th November 1938 the third cist was found very close by at NZ17486340. It was excavated by T R Goddard of the Hancock Museum. It was constructed of four sandstone slabs which formed a rectangular space 60 cms x 100 cms x 67 cms deep, floored by thin irregular sand stone slabs and topped by a broken cover stone. There were the remains of one person, with fragments of charcoal and burnt bone. A broken food vessel, light buff with a dark grey core, was 150 mm high, 166 mm diameter at the rim, and 68 mm diameter at the
base, and had a whipcord rim, alternating groups of horizontal and vertical lines of whipcord on the neck and shoulder, and vertical lines below this.

Cist 4 - Shortly afterwards, the fourth cist was found at NZ17476340. It was a similar burial close to cist numbers 2 and 3. This well-constructed cist had internal dimensions of 105 cms x 60 cms x 45cms deep, with particularly large and thick side stones and a cover stone 165 cms x 90 cms x 10 cms thick. The joints between the stones were packed with small stones or clay, and the floor of the cist consisted of 3 slabs of sandstone, 25 mm thick, carefully fitted together. The cist contained a contracted skeleton and a pottery vessel upon sand and pebbles, plus some fragments of charcoal and burnt bone. The pottery vessel was a beaker measuring 184 mm in height with a rim diameter of 153 mm. The neck was decorated with five notched-wheel horizontal grooves, and the rest of the body, below a zigzag line, had comb-impressed horizontal bands, chevrons, cross-hatching, herringbone and zigzag. It was probably placed in the Museum of Antiquities and later moved to the Great North Museum.

Cist 5 - On 13th November 1939 the fifth cist was found at NZ175634. It was recorded as being empty by a local historian, Mr Cocks, and moved to his garden, at Lilac Cottage, Barmoor, Ryton. The location of this find, though poorly recorded, may have been just north of the line of the modern A 695 road.

Cist 6 - Found only two days after cist 5, but at an outlying location 500 metres to the south west. The site is now under the premises of the Newcastle Oil Company. It was excavated by G W Temperley of the Hancock Museum, and contained a single burial, a pottery vessel and a flint flake. The underside of its capstone bore an incised U-shaped groove about 50 mm wide and set about 75mm from the edge of the stone.The cist was displayed in the grounds of the Ryton Urban District Council offices, and possibly moved to the Museum of Antiquities, Newcastle, on the 5th June 1972. The food vessel was described as in pink buff fabric, 210 mm high, and with the diameter of the rim 180 mm, base 90 mm. It had a bulbous body with a carination and concave neck but no collar. The neck and body were decorated with scored
cross-hatching, the rim with whipped cord. Its present location is unknown.

This account is compiled from a variety of sources.