In the years preceding the erection of the Chapel in 1829 situated in The garth, adherents used to travel to Horsley Congregational Church for worship each Sunday. Noble and loyal these people were, we cannot but hold their memory in great reverence and honour. In the passing of the years, it was to lead to a vision of a church nearer home. It was known as ‘Providence Chapel’ and could accommodate about 200 persons. The building was later used as an institute for young men. A new hall was opened on August 10th. 1889 with seating for about 300 persons. At the opening meeting Mr. Wilson Tyson of Newcastle, presided supported by Dr. J.H.Rutherford.  Alfred Barret Tebb began his pastorate of the Congregational Church in 1873 at the early age of twenty-nine and continued to labour in that sphere of work, which he undertook as a labour of love for his Master. It was through the energy of himself and his family that the project of a new church was decided upon. The site on which the church was erected was formerly occupied by the old national Schools and was certainly one of the finest in the village. The chief foundation stone of the new edifice was laid by Lord Joicey on December 11th.1907. The church was opened for public worship on Wednesday, April 28th. 1909 by Rev. Ambrose Shepherd D.D. of Elgin Church, Glasgow. Mr. E.R. Davison was the contractor and the church cost about £2000.00.

The history of the church would certainly be incomplete, Unless we placed on record the work of its Pastor for 45 years. Mr.Tebb died on December 5th. 1918. Few men have laboured more strenuously  for the public welfare and to suffer for conscience  sake. Everyone in the village knew him and gave respect. To the ordinary man in the street he was the ‘Reverend’. Should a squabble happen to take place, well, the crowd quietly disappeared at the sight of the ‘Reverend’. Mr. Tebb practically held all the positions that a public man could occupy, and was associated with no fewer than forty four different bodies. It has truly been said that the busy man always finds time to do another act of service. Mr. Tebb could be placed in that category. He was a member of the Durham County Council, Gateshead Board of Guardians, Governor of the R.V.I. and in 1906 he contested the Chester-le Street  division as a Liberal. On November 2nd. 1921 Mr. John Havelock of Newcastle, unveiled a monument erected in Blaydon Cemetery by public subscriptions to his memory. The proceedings were presided over by his friend Mr. Rutter Carr. At the ceremony the choir of his beloved church sang ‘Crossing the Bar’ which had been composed by his second son, Herbert. In addition £400.00 was allocated from the fund for a memorial scholarship, to be awarded to pupils proceeding to a university from Blaydon Secondary Schools. I would like to relate a true anecdote regarding A.B. Tebb. A title could be given to it. The only unusual thing about this Sunday morning was before commencing his sermon, he prefaced his remarks by telling his congregation “ I am commencing today the 40th. year of my ministry amongst you and how thankful I would be to see their beautiful church free from debt”. The amount of debt remaining on the church was £200.00.

Mr. Tebb attended daily to his business in Newcastle regularity being one of his precepts by the 9a.m. train. The following Saturday something unforeseen took place. He was on the platform at Blaydon, waiting for a later train than was his usual wont. He was not alone, for a gentleman from Stella ( Mr. Joseph Cowen) challenged him.” I read in the papers” said Mr. Cowen “ that you have a small debt on your church. Come across to the Chronicle office and I will write you a cheque. My sister mentioned the matter to me last night, and she, also wants to help you”. Naturally, this unforeseen incident did not end so abruptly. Mr. tebb fully expected he would be the first with the
good news. On his return home in the evening, on his way  up the bank, he would broadcast the news of the church being now free from debt. Alas, he was forestalled, for the news of the gifts had already been seen by the folk of Winlaton in the evening paper!

The furnishings of the church are enhanced by a fine oak pulpit executed by Messrs. Sopwith of Newcastle. It bears the following inscription :-  To the Glory of God and in attendance remembrance of Rev. Alfred Barrett Tebb, pastor of this church for 45 years – 1873-1918. Erected by members and friends on the occasion of the church centenary. October 1929.

Brass tablet :- Erected to the memory of Mary Elizabeth Tebb wiufe of rev. A.B.tebb. Erected by the  women’s Circle and friends as a tribute to sixty years devoted service in this church. Died February 15th. 1939.Brass tablet:- To the  memory of James Henry Reed, life member of this church. Died 30th. October 1931 age 71 years.The font was also given by the women’s circle. Brass floral bowl presented to the church by Miss G. Blenkinsopp, in memory of her sister. Rev. L. Woolley served as pastor from 1920 until 1925. The diaconate consists of twelve members, two being life members, Messrs. J. Blenkinsopp and A.S.Tebb. The members of the church elect annually ten more to act as deacons of the church. The names of those serving at present (1955) are:- E.G.Robson, James Forster, J.Rippeth, J.H.Thompson, J.B. Blenkinsopp,R.Burch, W. Armstrong, J. Thompson,J.Clark and J.W.Dodds.

Amongst its visiting preachers the most famous was Dr.J. H. Jowett, who, on that occasion expressed his appreciation of the fine congregational singing he had listened to. John Ramsey of Blaydon, was organist, and Robert Forster of Winlaton, choir conductor for many years.Herbert Tebb then took over both duties. Mr. Tebb was an accomplished musician and was much in demand as an accompanist at concerts throughout the neighbourhood. 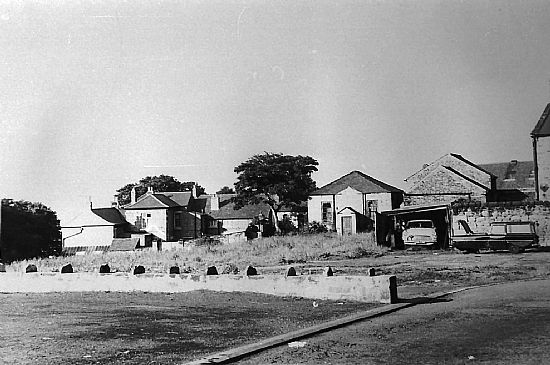 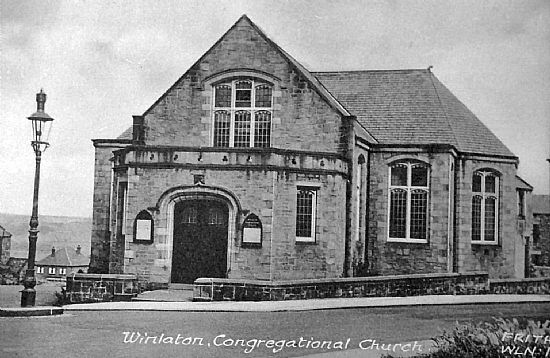