The site for the church was given by T.W.Beaumont Esq.and opened for public worship on 24 November 1844 by Rector Wardell of Winlaton.The parish was formed in August 1844 under the name of St. Cuthbert, Stella and included the whole township of Stella and part of the township of Winlaton. The benefice was constituted a rectory in 1866 when the Revd. William Brown MA who had been the incumbent since the formation of the parish became the first Rector. Revd. Brown was also responsible for the building of church schools in St. Cuthbert’s Square in 1853, beside the schools two houses and six cottages were built at the same time. Revd. Brown died age 59 on 15 November 1876 and was interred in the churchyard. The remote cause of his death was an accident which happened to him a few years previous. He had been superintending some repairs to the roof of the church when the scaffolding plank on which he was standing slipped and he fell heavily to the ground on his head. From that time he declined in health and in 1873 he was obliged to apply to the Bishop for leave of absence. The parish hall was built during the incumbency of Revd. H.P.Napier Clavering 1900-1906.

The church is stone built in early English style comprising nave, chancel, north aisle, vestries and a handsome pinnacle square tower added in 1862/3. The east window contains four pictures: Presentation of Christ in the temple, the raising of the daughter of Jairus, the Raising of Lazarus and the Ascension. Stained glass windows have been placed in the church to the Revd. William Dunn, a native of Blaydon a former Sunday School teacher and member of the church choir. He went with Bishop Tucker to Uganda in 1890 but died in Africa not long after starting work as a missionary. Alterations to the Chancel were completed in 1899.  Mrs.Greene the wife of Revd. Greene had organised a collection totalling £400 this was spent on an oak screen, clergy and choir stalls and a mosaic pavement. A brass plaque confirms that this work marks 25 years work in the Parish by Revd.Greene MA., Mrs. Greene and RDR Greene.

The richly carved oak pulpit commemorates the end of the South African War and the Coronation of King Edward VII in 1902. The Litany desk of oak carved by Hedley was given in 1909 by John Cunningham, a churchwarden for 17 years, in memory of his wife who had passed away the preceding year. The brass eagle lectern was awarded the first prize at the Newcastle Exhibition and the Bible which rests upon it was presented in 1875 by J.J. Hunter of Whickham Grange. The organ was built by Messrs. Nicholson & Co. of Newcastle in 1872 at a cost of £300.Later it was cleaned and new stops added in 1900 at a further cost of £100.The alterations of 1861/2 enlarged and enhanced the church considerably, they consisted of a spacious chancel, a north aisle,vestry and tower, this doubled the number of sittings and the creaking pew doors were dispensed with. At the entrance porch ornamental stone work was introduced adding much to the beauty of the church and the gable ends were adorned with finials of a cruciform character and carved heads above the windows, masonry work being carried out by Mr. March. The church had to close for twelve months whilst this work was being carried out and re-opened in 1862. The tower was completed the following year at a cost of over £200.

In 1876 a peal of six bells and a clock were placed in the tower, the money about £600 was raised by subscription, however the tenor bell bears the inscription “This bell was given by Sir Henry A. Clavering Baronet, Axwell Park, and the fifth bell has the inscription “ Stella Parish, Easter Day 1876”.Easter Day was  an important day for the church for it was the first day the bells were set in motion.  The clock was made by Messrs.Reid & Sons of Newcastle upon Tyne the gift of John Bell Simpson, then of Hedgefield House. In 1882 the church again went through a period of renovation,new heating was installed, new benches, the extension of the vestry and the organ was moved to a chamber in the chancel. There was a celebration service to mark Queen Victoria’s Diamond Jubilee in 1897 and after the morning service the clergy and choir and the Stella Military Band playing Mozart’s ‘Gloria’ ascended the tower and the three dials of the clock were lit.

Taken from 'The History of Blaydon District' by James Maughan, published in the Blaydon Courier 1955 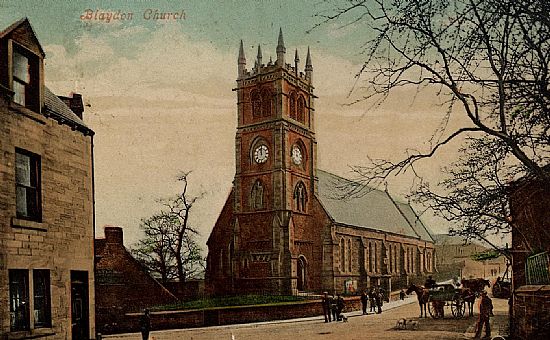 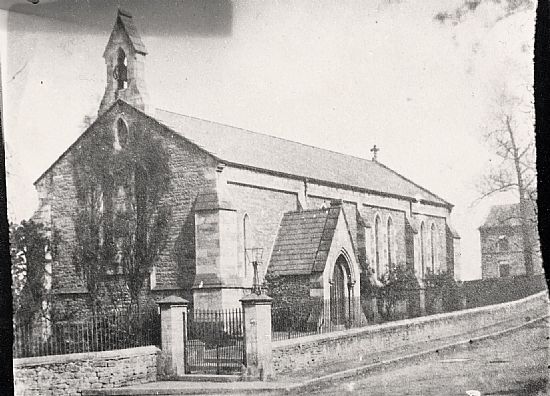